The Ijen volcano complex is a group of composite volcanoes in the Banyuwangi Regency of East Java, Indonesia.

It is inside a larger caldera Ijen, which is about 20 kilometres wide. The Gunung Merapi stratovolcano is the highest point of that complex. The name “Gunung Merapi” means “mountain of fire” in the Indonesian language (api being “fire”); Mount Merapi in central Java and Marapi in Sumatra have the same etymology.

West of Gunung Merapi is the Ijen volcano, which has a one-kilometre-wide turquoise-coloured acidic crater lake. The lake is the site of a labour-intensive sulfur mining operation, in which sulfur-laden baskets are carried by hand from the crater floor. The work is paid well considering the cost of living in the area, but is very onerous. Workers earn around Rp 50,000–75,000 ($5.50–$8.30) per day and once out of the crater, still need to carry their loads of sulfur chunks about three kilometers to the nearby Paltuding Valley to get paid.

Many other post-caldera cones and craters are located within the caldera or along its rim. The largest concentration of post-caldera cones run east-west across the southern side of the caldera. The active crater at Kawah Ijen has a diameter of 722 metres (2,369 ft) and a surface area of 0.41 square kilometres (0.16 sq mi). It is 200 metres (660 ft) deep and has a volume of 36 cubic hectometres (29,000 acre·ft).

The lake is recognised as the largest highly acidic crater lake in the world. It is also a source for the river Banyupahit, resulting in highly acidic and metal-enriched river water which has a significant detrimental effect on the downstream river ecosystem.[4] On July 14–15, 2008, explorer George Kourounis took a small rubber boat out onto the acid lake to measure its acidity. The pH of the water in the lake’s edges was measured to be 0.5 and in the middle of the lake 0.13 due to high sulfuric acid concentration.

One goal of the tourists climbing Mount Ijen in Banyuwangi with an altitude of 2,443 meters above sea level is to see the blue fire in the crater. Not only the domestic tourists, but the foreign tourists are usually also eager to see it.

Basically the blue fire can be seen after the sunset until the dawn. The reason is easy, as far as there is sunlight the blue fire won’t be on sight.

However do you know that the blue fire in the crater of Mount Ijen is not actual fire?

Blue fire is a natural phenomenon, created by the gas coming out of the ground after meeting with oxygen. It looks exactly like a flame with blue color.

Nevertheless, the tourists usually talking or even debating on how the blue fire in the crater happen. In fact the phenomenon of blue fire is already known by the world travelers. Indonesia should be proud to have such a phenomenon which is only two in the world, the other one is in Iceland.

For the travelers who want to enjoy the blue fire, they have to climb Mount Ijen. From the first post of Paltuding, they will need to hike for about three kilometers to the top of the mountain.

The first one kilometer is not that steep. The second kilometer is the heaviest terrain to hike, while the last one kilometer is rather moderate. Once getting on the top of the mountain, visitors still have to go down to the crater through an 800-meter staircase to see the blue fire.

The best time to see the blue fire is a couple hours before dawn until about 5 am. In this period of time, the oxygen is quite plenty so the blue fire will look perfect. Oh, for your information, the phenomenon of blue fire was first reported by the local communities in 1950! 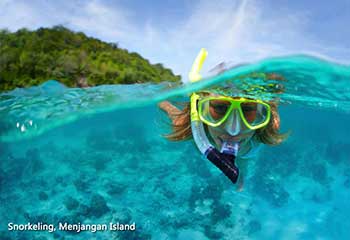 Bali In Depth And Overland to Ijen

Overland From Central Java to Bali